What happens when a convicted murderer edits Wikipedia 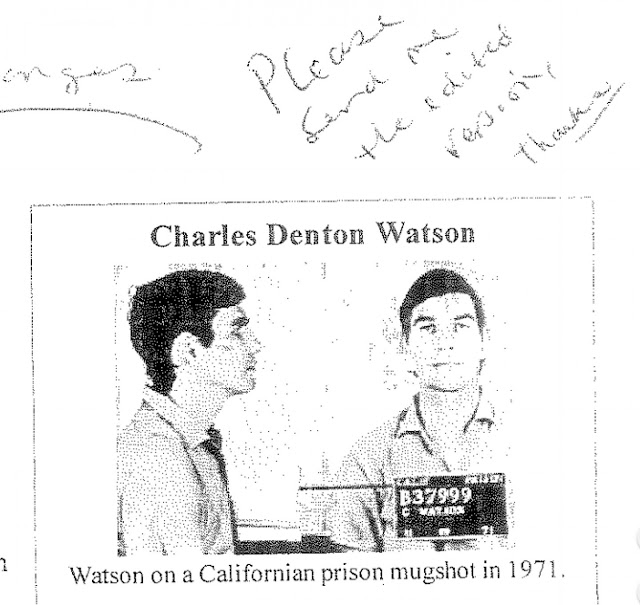 Charles Watson at the time he was jailed.

Charles Watson, convicted of seven first-degree murders in 1971, does not dispute that he stabbed, shot and mutilated several people to death. Nor does he deny being "the right-hand man" of the cult leader and killer Charles Manson.

But Watson, still serving a life term in Ione, California, does reportedly want to set the record straight on a couple of scores: last week, someone claiming to be the 70-year-old convict submitted a list of meticulous corrections to Wikipedia.

Among other things, the person claiming to be Watson disputes that he took $70 from one of his victim's purses, or that he ever went by the nickname "Mad Charlie." He also wants the world to know he attended Cal State, not the University of California — and that, four years after his infamous killing spree, he converted to Christianity.

The requests, which were made on a print-out copy of Watson's Wikipedia page dated February 16, reached Wikipedia via a little-known process that lets non-editors suggest changes to the site. Watson's request was processed on Thursday when a volunteer noted it in the discussion thread on his page, and became public earlier this week when it was reported by the Wikipedia watch blog The Wikipedian.

We should note up front that it's not 100 per cent clear whether Watson actually made the requests: Wikipedia's rules on verifying identity in such cases are highly flexible, and repeated calls to Watson's foundation, Abounding Love Ministries, were not answered.

Lane Rasberry, the Wikipedia volunteer who processed the request, told The Washington Post that the message arrived at Wikipedia via a volunteer-run transmission service that helps inmates communicate with the outside world. Rasberry says that he was personally convinced the intermediary was genuine, and that he did provide, in response to Rasberry's request, a signed legal statement asserting both that the handwritten edits came from Watson and that he'd given Wikipedia permission to upload and publish them.

That seems to have satisfied Wikipedia editors, who quickly jumped on several of the suggested changes. It's also provoked fascinating discussion about the merits of involving socially stigmatised groups like prison inmates in the Wikipedia knowledge-making machine.

In a widely circulated blog post on the subject, Rasberry — who is also the Wikipedian-in-residence for Consumer Reports — makes a strong case for doing so: After all, Wikipedia's core philosophy values information far above the anonymous crowd of people actually writing it. In Watson's case, the edits were well-sourced and meticulous. As a result of his (or his impersonator's) notes, editors acknowledged that the page lacked citations to reliable sources and flagged it for further revision.

"There is lore in the community of reference work developers," Rasberry wrote, "that it is best to accept good contributions from any source."

The nonprofit Wikimedia Foundation has certainly devoted a lot of money and effort to diversifying those sources. In this year's grant cycle alone, the foundation has funded projects to encourage women, senior citizens, adults with disabilities, and people in the developing world to contribute to it more. But neither Rasberry nor William Beutler, the publisher of the Wikipedian, recalls ever hearing of a project or proposal that would specifically encourage prison inmates to become Wikipedia editors — that in spite of a proliferation of programs and services that help inmates send emails or write blogs, for instance.

Whether the Watson incident inspires more activism along these lines remains to be seen. But Rasberry, for one, seems open to the possibility.

He cites the story of W.C. Minor, widely recognised as one of the most prolific and valuable contributors to the early Oxford English Dictionary. Minor shot and killed a man in 1871 — and made most of his contributions to the English language from the inside of an insane asylum.
The Washington Post
Posted by Volly at 11:12 PM